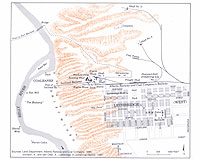 A
fter the coal is drawn out it is taken to the foot of the incline preparatory to being drawn up. When the man in charge of that part has a load ready and the wire cable coupled on he gives the signal to the engineer by means of an electric bell. Then the five trucks which comprise a load begins the ascent of the incline the length of which is 2,100 feet. I rode up on one of the trucks and enjoyed very much the novelty of riding at such speed up the hill.

About half way, five empty trucks passed going down, so that when the five full ones arrive at the top the empty ones have reached the bottom. The full trucks are pulled up onto a high trestle, and there are men ready to run them forward to the dump and by means of a spring, the truck is dumped onto a screen. Thus the dust is separated from the good coal, then the coal passes into a hopper and is weighed. From that the coal is dumped into the car ready for shipment to Dunmore. Each car holds ten tons and each train consists of fifteen cars, thus each train pulls out with 150 tons.